Yesterday, eldest daughter and I headed up into hills and high moorland for a much-needed walk. It was cold enough to require full winter hillwalking kit, plus ( on my partner’s insistence) I carried a bivvy-bag, just in case one of us fell down and broke something and the other one had to go for help. Plus spare food, more layers, a balaclava and snow goggles.

You can’t be too careful. Hills kill.

I’d been somewhat dismissive of all this caution until we got up on the plateau ( I use this word loosely, it’s just the high moorland, but still, the views are amazing) and the wind buffeted us. Actually, it knocked us sideways and we stopped to put on more layers. At which point I realised that I was very cold indeed, despite Goretex, down, merino and everything I’d wrapped myself in in the hope of staying toasty. I’d forgotten to bring a proper hat. I was only wearing a fleece headband. I had packed a balaclava, and they’re all very well when you don’t have to bail out your streaming nose every five seconds, but otherwise they’re useless. My head was freezing, and despite gloves, my hands were so cold they were almost unable to work zips or fastenings.

On we marched, through a patch of spindrift ( you can just about see it in the photo above)  looking forward to the halfway point where we planned to stop for sandwiches and a cup of tea before heading back.

It was so cold, that even down off the moorland, tucked in a river valley, we only paused for five minutes before the temperature drove us back onto our feet again. And if anything, after lunch, I was even colder than before.

But oh how beautiful it was. To be outside, in winter, to simply be walking and breathing – it felt like a gift. Despite the bits of me that weren’t feeling quite so appreciative of all this beauty. To my frozen hands and head, I added the grinding of hips and wailing and gnashing of knees. And after we stopped again for a cup of tea and a slab of leftover Christmas cake with a dentist-dismaying layer of icing so thick it looked like the snowdrifts around us…well, that kicked off the siren-song of a distant migraine.

But we were on the way home, supper had been discussed and decided upon ( eldest daughter and I talk about food a lot) and we were both beginning to feel that glow inside that comes after a grand day out on a hill. Any physical effort that pushes me beyond my comfort zone seems to do the trick ; running, walking, sobbing my way up mountains – they all have the same net result. Contentment.

And sometimes if you’re  winter walking on clear days yore given the extra reward of twilight skies. Like this – 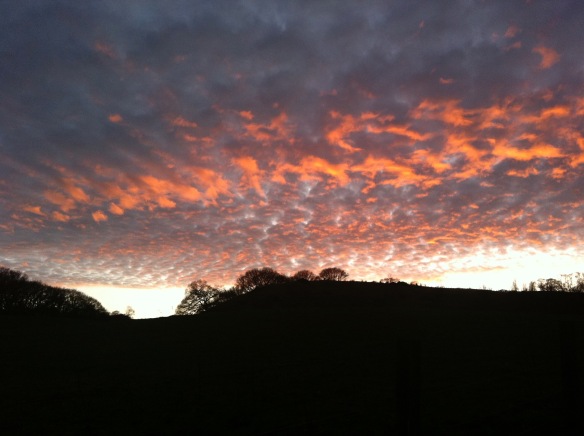 Then we headed home to the agony/bliss of a hot shower and a well-earned bowl of pasta.

Small thing to do to make yourself feel a bit better – If you’re able to, take yourself out for a long walk. It needn’t be with anyone ; in truth, most of the time my eldest daughter and I spent up in the hills was in companionable silence broken only by the swish swoosh of her weird gaiters, but just letting our feet carry us while the landscape unspooled around us was quite enough. It most certainly doesn’t have to be up into high moorland either – it just has to be longer and further than you would ever go on a normal day. I’m certainly not advocating that you undertake anything that would put you in any danger. Plan it in advance, look up your route on a map and see how far you intend to go. Don’t attempt anything heroic – this is meant to be restorative, not draining. Pack a picnic and suitable clothing and anything you feel you might want or need on a mini-expedition including a calorific reward to get you through the last few kilometres before home. Leave a note saying where you’re going and when you hope to return or let someone know that’s what you’re doing.

It’s your journey. It begins when you shut your door and step out into the world. You can see a small part of the path ahead of you, but despite your planning, you cannot see further than that. ( I tell children about this when I visit schools ; I liken the photograph below to the process of allowing yourself to write a story. You can see the first part, but the remainder winds off enticingly into the forest.) Trust your feet to carry you forwards, and open your senses to all the winter world has to give you. 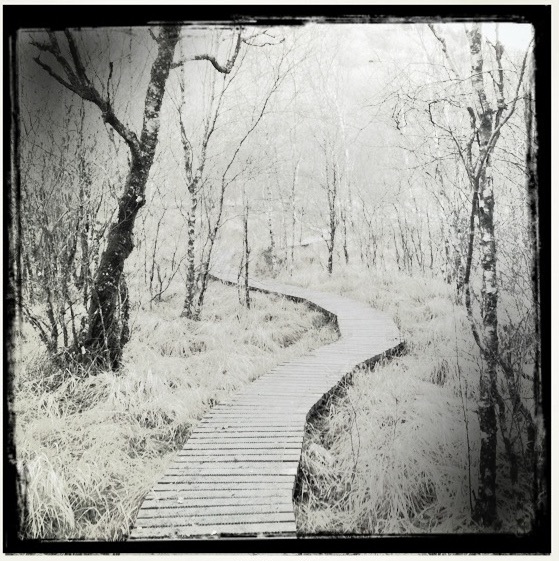