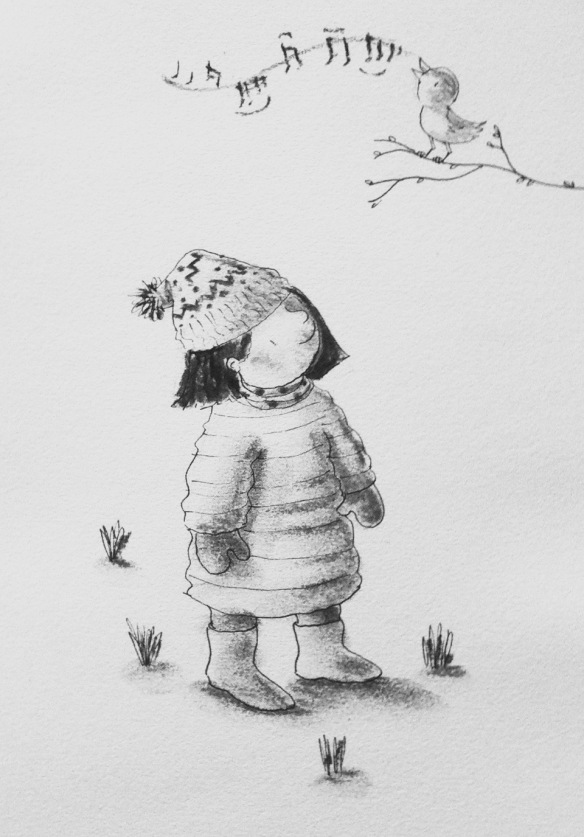 It’s almost imperceptible, but night-time is happening later and later each day. The year has definitely turned. Buds are budding, birds are singing and green shoots are poking up through the earth…you get my drift. Why this should be a cause for joy inside my head is another matter – as the light returns, I draw closer to my own particularly perverse seasonal affective disorder ; namely, the more light there is, the worse I seem to feel. Go figure. Perhaps it’s the frequent disappointment of yet another dreary Scottish summer ( sorry, Scotland, nothing personal, just…you could try harder) coupled with the knowledge that I seem to be locked in perpetual combat with myself at a time when it feels as if everyone else is looking forward to holidays, sunshine, barbies and time off…

So why am I posting this? Why advocate something I don’t feel works for me? Getting out there and looking for signs of spring? I think I’m doing it because I’m convinced that taken one day at a time, this gentle medicine works. Instead of trying to look ahead to tomorrow and worry about what’s happening on the world stage ( no, no, no, let’s just not) perhaps we need to take each day one at a time. Each hour, if necessary. Heck, let’s break it into easily assimilable minutes. So, in this minute, the birds are singing their hearts out. The grey sky is a restful  pearly grey. This moment is good. I am breathing. Nothing hurts. Well…after today’s session with the energetic yoof and super-fit people at the gym, actually everything hurts, but we’ll gloss over that, shall we? This single moment is amazing. I’m grateful to be here and now.

And hold that thought.

The small things that bring pleasure, the vanilla moments of semi-contentment ; these little things vanish when we suffer from depression. In fact, they almost turn against us, taunting us with a faint memory of what used to be, whispering in our ears that such moments will never return and it’s probably our fault for not appreciating them enough in the first place. When I had my first encounter with depression, I looked back to the postgrad year I’d just finished and couldn’t connect with who I’d been then. She ( the illustration post-grad) was made out of an altogether different substance from the soggy mess I’d become. She was busy, happy ( I thought) and looking forward to a future which seemed to be opening out like a flower. (Which it did, but not until I’d gone through a year of illness.)

A dear friend cajoled me into coming out to dinner with her and some of her women friends. ‘It’ll cheer you up’ she said, thinking that being in the company of these amazing women would somehow rub off on me, or that they could accomplish what I’d clearly been unable to do. By then, I was on a hefty dose of amitriptyline, which I suspect I wasn’t supposed to mix with alcohol. I forget what the contraindications were. Anyhoo – I was too ashamed to say to her a. I’ve actually had to go and see a psychiatrist and have been diagnosed as being clinically depressed and b. our family doctor has prescribed an antidepressant medication that appears to have turned me into a zombie. I couldn’t even tell one of my closest friends that this had happened. Such was the stigma back then. I felt, deep down that somehow it was my fault that I was in this state.

So we took our places round a large table in a restaurant. The women ordered wine, I tried to bleat out something about how I’d rather not drink, but due to a combination of my newly-acquired stammer and the general noise levels in the restaurant, an unwanted glass of white wine appeared in front of me. Since the whole meal was a gift to me from my friend, I didn’t want to appear ungrateful, so I tried to sip it very slowly. The meal finally came and the conversation flowed around me. The women were bright, funny, clever and kind. They tried to include me in their group. They brought me in on topics, threads, jokes but nothing seemed to enable me to speak. I felt as if I were a large, silent rock on which every little conversational wavelet, every big frothy surge crashed and ebbed upon. In the waves came, and out they went, leaving me mute and still. I simply had nothing at all to contribute.

Then I began to feel very unwell. I managed to flee the table and made it to the bathroom just in time to lose medication, wine and supper in one go. I washed up, tried to make myself look less ghostlike, and returned to the table. I don’t think I’ve ever loathed myself as much as I did that night. Back home, my partner asked how the evening had gone, obviously hoping that I’d miraculously ‘snapped out of it’ or that the company of some good women had helped return me to myself in a way that his best intentions and efforts were clearly failing to do. I knew how much I was letting him down when I said that I hadn’t enjoyed it much. I saw myself through his eyes and, if anything, felt even worse.

The main problem then, as now, was a lack of communication. I couldn’t explain how I felt without appearing to sound as if I was either criticising,  being ungrateful or just pathetic. I was ashamed at myself for succumbing to this illness. Nobody had actually said to me that depression wasn’t my fault, or that it wouldn’t last forever, and I, in turn, couldn’t explain how terrible it felt. Words were letting me down. In extremis ( and depression fits that category) I became inarticulate. Yet I needed contact – I desperately needed to feel that I wasn’t alone. The isolation brought about by depressive illness was the loneliest place in the world.

Thirty two years later, in drawing ( and writing) Night Shift, I wanted to try to assist  communication between the spheres of the ill and the not-ill. To facilitate a signal boost between worlds. To let the birdsong back in and allow us to take one day, one moment at a time. To reassure us that this will not last for ever. To be able to point to an image in the book and say – this is how I feel right now. Help me. Give me a hug.