Those of you who have been following this blog as it takes its infant steps across the digital carpet* may have noticed that it has had a makeover recently. Before then, I was reduced to weeping and swearing like a Clydeside docker at my laptop. What the hell was a widget? How was I supposed to know if I needed to tag things, or use a standard format and how come my illustrations wouldn’t fit on the welcome page?

A friend helpfully pointed out that my blog looked a bit corporate, then confessed that she hadn’t a clue how to help make it look better. Cheers, mate. Other friends made soothing sounds and muttered something encouraging about how it was the content, not the packaging that counted, but…och. I mean OCHHHHHH. I’m supposed to have a degree in graphic design and illustration for heaven’s sake. So what if it was handed out in a bygone age when we ( I kid you not) learned our typography skills by slotting little tiny metal legs with individual letters impressed on one end into other metal slotty things ( technical term) which were, in turn, slotted into big metal clampy things ( another arcane technical term) and then inked up and slooowwwwly thudded down onto bits of paper. At which point, I’d invariably discover that I’d put the d or the p or the q or the b round the wrong way. And out it would all come, and I’d begin again. Oh, how we suffered, just to put together one single paragraph of type. This single post, back then, would’ve taken three miserable afternoons in the Case Room, enduring the wrath and scorn of the grumpy printer whose karmic destiny it was to instil the rudiments of typography in a group of delinquent art students. Poor man.

Where was I? Ah, yes. Making my WordPress blog look good. So. On I went, trying to ignore the mess of the home page, the fact that I seemed to have spawned not one, but three blogs and the feeling that I was adrift in a sea of technical jargon, surrounded by much evidence that every single other person using this site appeared to be terrifyingly accomplished, design-savvy IT gurus. I’d landed on WordPress like a newbie at Wimbledon armed with nothing other than a burning ambition to play using  an old, saggy Slazenger. Oh…Miss Joan Hunter Dunn. Oh, do shut up, Gliori.

Until…an email arrived from my friend the Bookwitch. Being a Witch, and not just a common-or-garden Witch, but  a witch who blogs, she had divined that I was making a mess of my attempts to prettify my blog. And offered help. Real, practical help. Hers plus the assistance of her husband, the Resident IT Wizard.

Really? I mean, why would you want to be trapped in your own gorgeous sunroom with a waffling, flapping and deeply confused illustrator who can barely recall her own password, let alone decide what template she’d like to use on her new blog? Why? This, friends and neighbours, is an important question. Why would you do this to yourself?

I think the answer lies in kindness, in all of us working together, sharing skills, giving up of our most precious commodity ( time) and also, I may be alone in thinking this, but it was fun. I really enjoyed spending an afternoon in the company of a BookWitch and an IT Wizard. We talked of many things ; politics ( how could we not?) long-distance walking, far-flung daughters, how long a kilo of pasta can stave off starvation and finally, of buns. Vanilla tea was poured, followed by a plate of buns.

Ohhhhhhhhh. The buns. Imagine, if you will, a brioche-type dough, but denser than that. A reinforced bread/cake hybrid. Imagine it baked to a shyly golden hue, then cooled and its little top sliced off. Imagine it is then gently filled with a grainy paste, something like marzipan ( I love the old word ‘Marchpane’ for this sweetmeat) but far more granular. On top of this is piled a pillowy, billowy cloud of whipped cream, whereupon the little lid is replaced on top.

Behold. The Bookwitch’s Lent bun. My illustration doesn’t even come close to doing it justice. A thousand thankyous to you and your husband for making my day. It was, as the young people say, MIGHTY.

*Apologies for this. Digital carpet? Who writes this stuff? 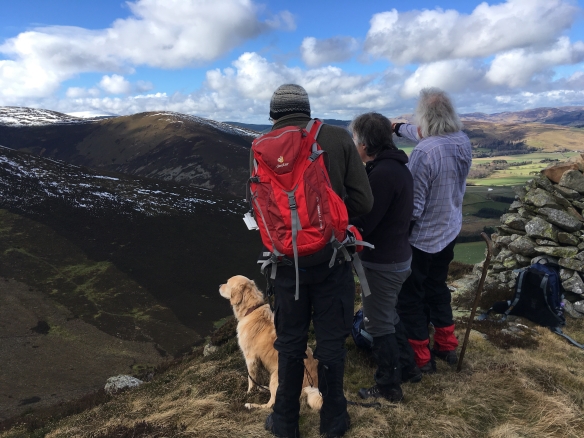 Atop a hill near Peebles, contemplating heading onto higher ground into snow, we paused to take stock. Note the dog. The dog with the amazing, finely-tuned nose. She is smelling the wind, delicately picking out each and every scent that it brings her. The wind smells of snow and heather, of sweat and goretex, of sheep and rabbits and, hang on, of guinea pigs?

But I’m racing ahead here. Let’s just stick with the dog for the moment.  Her name is Cara, and we love her extravagantly, all the more so because she’s nine and we are also, probably in dog-years, close to nine too. In short, none of us are exactly in the first flower of youth. Anyhoo – I digress. This day had been pre-arranged, inked in diaries, put off and rescheduled but finally fixed upon for a long hill-walk, and we were packed and equipped for a good day out on the hills ; sandwiches, fruitcake, tea, oatcakes and if we peered through binoculars, we could just about see the splendid frontage of Peebles Hydro which, if we felt in need of rescue by way of tea and scones, we could try to walk the miles between us and it and hopefully get there before they stopped serving such delights.

However, the fates had something different in mind. A little curved ball for you? Or, how about two? An hour before this photograph was taken, we’d been getting our boots on in a car park about two miles from Peebles on a very B road. In fact, it was so B it was probably a C road. The car park was, regrettably, full of trash and dog shit, and we were mincing our way around it, tying laces and complaining about the fecklessness of gaiters and the gruesomeness of dog owners who don’t clean up when Cara ( the dog? remember?) dived off into the bushes and something black and white bolted out ahead of her. The men in our company gave chase and found that what Cara had uncovered was a very small and terrified guinea pig. What to do? As we debated what on earth to do with this squeaking, tiny creature, Cara lunged back into the bushes and flushed out another, larger, cinnamon and black guinea pig. AAAARGH. Just how many of them were in there?

Fortunately, only two. Faced with the prospect of pretending we hadn’t seen them and releasing them back into the wild ( no, too cruel) or calling off the hill walk and going home ( no, we’d taken three months to synchronise diaries to actually get to this car park, let alone up the hill) we decided to make a cave for them in the back of M’s car, leave them some of Cara’s dried food and a few oatcakes and a dish of water, and head up the hills anyway. At least the car was safe and warm.

The hill walk was glorious, but we did fret. There was much training of binoculars on the car park to check that nobody was standing over our car with an axe, full of self-righteous guinea pig liberating wrath ( there wasn’t) and we worried that they might find the car too warm after their time in the snow in the car park ( they didn’t appear to). M did also consider that by the time we returned to the car, he might find its wiring and electrics somewhat compromised, but we needn’t have worried. All was well when we returned. There was an unbelievable quantity of what guinea pig owners coyly term ‘magic beans’ released all over the boot of the car. Who knew they could produce quite such copious amounts of the stuff, but it’s an old car and M is a kind man. Much kinder than I, since I wouldn’t have been anything like as sanguine if it had been my car they’d used as a latrine.

So. What to do? Well, we took them home, of course. In a bag for life. Guinea pigs for life. *Sigh* But seriously, how could their previous people do that? Peebles was Baltic. The car park was full of Jack Russells when we got back to the car. It doesn’t bear thinking about…

Look – here they are, about to emigrate from Peebles to the Lothians, the poor wee mites.

Found is the black and white one and Lost is cinnamon and black. M took them to the vet and discovered that they’re both boys and they were very undernourished. They lived for a few days in an old steamer trunk and then we cracked and bought them a luxury condominium with two bedrooms, in which they enjoy hot and cold running straw, herbal forage, and copious amounts of spring greens and kale interspersed with a little chef’s salad of red peppers, cucumber and carrot.

Everyone who’s met Lost and Found says the same thing – oh, boy, those are two lucky guinea pigs. And yes, I suppose compared to what might have happened in that car park, yes they are. Sort of. But… many years ago, when we buried the last of the children’s tiny caged animals under a tree in the garden ( Ruff, the beloved hamster) we both swore that we’d never, ever, ever have a small creature in a cage as a pet again. It’s just too sad. I mean who the heck do we think we are, subjecting animals to that kind of half-life?

Plus, please don’t judge me, but part of me wants to stamp my feet and sob –  we’ve only just released our last child into the wild. After forty years of parenting. ( She’s not forty, but we do have five children. ) Surely we could have  a little time where we aren’t subject to the needs of small creatures? A little time in our lives where we could, at the drop of a credit card, decide to go away for a weekend up North. Unplanned. Oh, the heady freedom of it, thwarted by two little guinea pigs. And then I hear Found’s mellifluous fluting chirrup, or I see Lost lying on his side, so full of straw he’s in danger of being classed as a paliasse rather than a rodent, and I…er…um. Melt. Soften. Make some pretty rodent-like fluting sounds myself.

Just don’t, I beg you, don’t say – oooh, they’ll give you some good ideas for your next book. Because I’m there already. Thinking. Chewing. Nibbling in fact. I appear to be trying to turn straw into gold. Or magic beans. Or something…