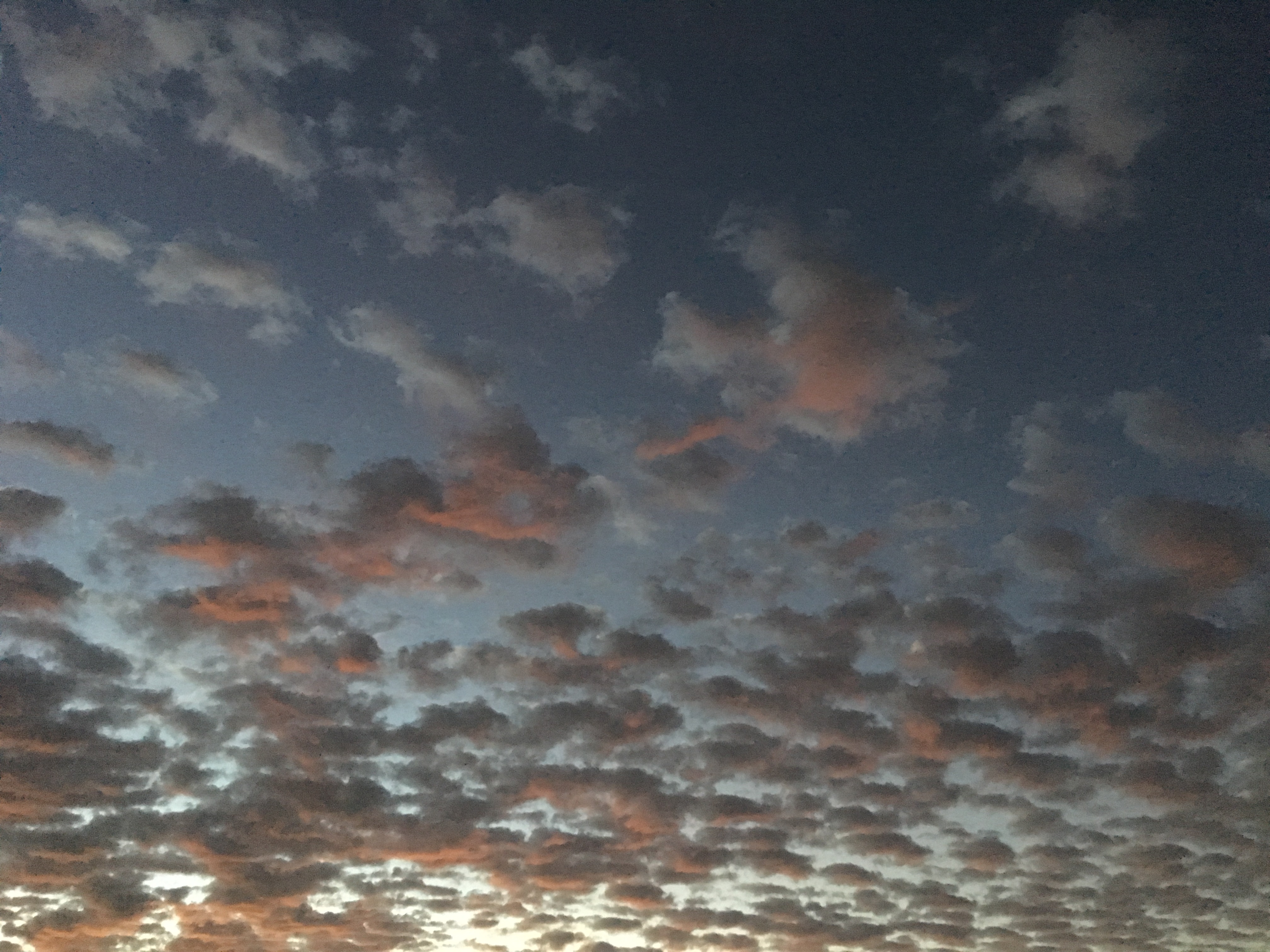 In the midst of all the weirdness currently afflicting our island, it was a choice between posting soothing pictures of guinea pigs or this one of some clouds. Normally, I’d post guinea pigs but…

It’s a long story and normally I’d say pull up a chair, pour yourself a cup of tea and let the golden retriever come and melt you with her beautiful kohl-rimmed eyes but…

Our beautiful Cara started her long transformation into becoming a birch tree last November, so she won’t be turning anyone into a melted puddle of dog-adoration any day soon. I couldn’t bring myself to write or post or tweet about losing her at the time, and even now I feel very strange writing about one of the bleakest days of our lives, so forgive me if I stop now. Suffice to say, last year was a little slice of hell-on-toast and not just because we lost our dog.

It began with a visit to a physio at one of Edinburgh’s private hospitals. Judge me if you will, but I paid for treatment because after forty years of trial, error, drugs, devices, diets, wash-outs and therapies, I was desperate to get to the root cause of my three-times-a-week migraine habit and having a perpetual sore neck seemed to be part of the problem. By ‘sore’ I mean ‘interrupts and hinders sleep’. Heaven knows, being an illustrator means you cannot in a million years afford private healthcare, but being unable to work due to pain means this little ship goes under so – I chose the lesser of two evils and paid to be treated.

And that, friends and neighbours, was my first mistake.

One day, at the start of June, the physio dug deep into my neck and simultaneously pulled hard on my left arm ( I’m left-handed) and the next day I was in a world of pain. No sleep. Not for forty-eight hours till my GP got some serious painkilling drugs down my neck and diagnosed acute tendonitis.

Couldn’t use my left arm at all. For a month. Couldn’t drive ( couldn’t use handbrake or gear-shift) for THREE months. Couldn’t raise arm higher than waist for two months. Couldn’t fasten own bra strap. Couldn’t dry off after the shower. God – the list goes on and on and on. Suffice to say, it was not only painful, necessitating two months of sleeping in a sitting position, but also made working and thus earning a living impossible. For two months. I emailed the physio to point out that she’d mangled me, but unsurprisingly, she had developed rapid-onset amnesia and denied all responsibility for wrecking my arm.

Migraines ramped up a notch or two. GP said ‘you’ve reached the end of the treatment road’ – not what a serial migraineur wants to hear. Not then and not ever. So – and here’s where you’ll throw your hands up in horror and wonder just how dumb I am. So – upon learning that the waiting list in the Lothians for referral to a consultant neurologist ( migraine being a neurological disease) is twenty two weeks, I did it again and paid. One appointment. At the same private hospital. Still a long waiting time but now whittled down to eight weeks. I reckoned I could hang on for that long if it meant seeing an expert who might listen and help and, I have no idea – wave a magic wand?

During which time, my elderly father was admitted to hospital after a fall and daily visits became part of the summer-of-Awful. Daily hospital visits began, for which, due to buggared shoulder, I had to rely on my brother to do the driving. Daily visits which were, in themselves, Beyond Awful. I won’t dwell. Brother and I used to reel out of the NHS hospital amazed at the care and dedication of the staff, but in shock nonetheless after spending time on a ward full of severely wandered and very ill old men.

Migraines ramped up another notch. Work fell away to nothing. Depression came calling, wisps of fog rolling in and turning what everyone said was the best summer ever into a grey porridge. Couldn’t swim in the sea because shoulder wouldn’t allow me to. But still, the neurology appointment came closer and closer and perhaps something would change for the better? I hung onto that hope like a life raft.

Come the day, I pitched up at the ritzy reception desk, was directed to a chair and waited. And waited. And waited. Mr ___ was late. Twenty five minutes late, to be precise. When Mr ____ rocked up, wreathed in smarm, with no apology for lateness and swept me into his consulting room, to my acute disappointment, he proceeded to plug Botox like there was no tomorrow. Sure, there were other drugs, most of which I’d tried, there were a few others I hadn’t, one of which he could sell to me, but Botox was the one. For sure. Thirty-odd injections in my scalp and temples every three months for a huge chunk of cash each time. Recommended at least three rounds of treatment before deciding whether it worked or not. I demurred ; nine months of trialling a new treatment which might or might not do the trick…was that the best he could do? And besides, I’m an illustrator, not a fund manager.

At which point, he began to lose interest. Well, I could ramp up the dosage of the drug I was already on, he admitted. It was effective, if I could tolerate the side effects – this last seemed like a veiled threat. And that was all he wrote. End of consultation. I noticed that he hadn’t over-run my hour’s appointment. I’d had precisely thirty-five minutes which added to the twenty-five I’d spent waiting for him to appear made his next patient the lucky recipient of an appointment on schedule.

And then it all went pear-shaped. I ramped up the dose. The side effects were grim. So grim, I passed out on the bathroom floor, came to with a dent in my forehead which I have to this day, lost twelve kilograms in eight weeks, developed a tremor in my left hand and finally got to a point where I was thinking Seriously Black Thoughts 24/7. In the middle of this, brother and I were trying to sort out our dad’s house so that he could return home from hospital with some kind of care package in place. And go visit him in the brand-new care home he’d been placed in until we got our collective act together and made his house safe, zimmer-friendly and squalor of decades free. Skips were hired, weekends were spent gutting the ground floor, every time I did anything that used my left arm, I’d pay for it later that night. Two steps forwards, three back. Finally, it was decided that dad was never going to be able to return home and thus a permanent care home had to be found.

And all of this against the backdrop of a summer that just wouldn’t quit while farmers in the Lothians conspired to fill our air with the vomit-inducing stench of hen-shit. Everywhere. Every field. And our house is a little island of organic vegetable plot and flowers in the middle of a sea of agribusiness. The whole of East Lothian sweltered under a toxic cloud of noxious odours. Trust me – you had to be there to grasp the full foulness unleashed on our innocent airways. And migraines make me preternaturally sensitive to smells. As did the drug I’d been prescribed. Plus, I couldn’t eat, so profoundly, gaggingly nauseous did the drug make me feel. And the migraines had turned into a non-stop headache caused by over-use of medication for migraines. Oh, joy.

Other than following where the Seriously Dark Thoughts led, the only solution was to come off everything. Do a total wash-out. Take nothing when migraines struck. Not even an aspirin. That wiped out September and October and half of November. A weekly appointment with three day migraines. And our dog fell mortally ill. Our lovely Cara with the kohl-rimmed eyes and the softness of her head and her love for parmesan rinds above all else. Oh, Cara.

I’ll stop here. I did say it was a long story and I will continue soon, but for now, a pause to remember how good it is to share our lives with loving and loyal companions. She’d just come back from trying to persuade all of us to not swim. She’d swim out to where we splashed and wallowed, barking nervously, trying to herd us back to shore. Her pack. Who miss her so very much.