So. Today was another day of waiting for progress on the book front and rather than waste time trying to write something else when I already have several irons in the fire or hanging in the wind or whatever metaphor you might prefer to describe projects stalled in the ‘your call is valuable to us but all our operators are busy so please hold…’ phase, I decided to do things to make myself happy. 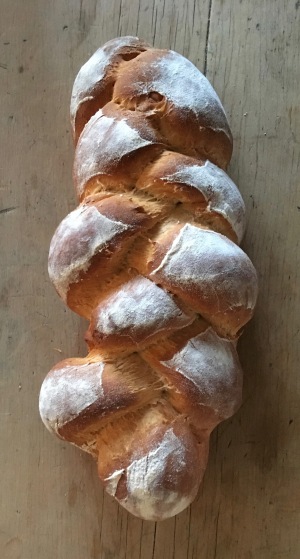 This made me happy on several levels. One: thrift. There were four eggs left over from before Christmas, so I cracked them and sniffed cautiously and then turned  them into what I think is called a ‘reinforced dough’ with the addition of honey, salt, yeast and flour. The dough rose like a rocket, but that may have been because I sat it in a very warm place.

Two: simple alchemy. Making bread makes me feel like a goddess of the kitchen. Nothing like Nigella, more of a minor magician, adding a pinch of this and a bit of that and stirring it all in my crucible. The way dough rises is like life itself. Forcing its way up, even in the oven as it is transmuted into bread.

Three: making grown-up mud pies. There’s nothing quite like footering around with bits of dough to take me back to playing with my bestie Isabella when we were seven. Roaming wild in the dust and sand behind Tante Fiona’s house in Majorca, we used to make pretend food, smoke Uncle Morty’s cigarettes ( and throw up in the bushes – eughhh, why were we so keen to grow up?) and generally play at being grown-up ladies. I wonder where Isabella is now? Anyhoo, I digress. Mud pies rock, especially when you’re middle-aged and much in need of some proper playtime.

Four: the smell. Bread, just out of the oven has to be one of the best smells ever. It greets you as you come in the door, it warms the kitchen and it makes me want to eat and eat and eat…

Alas. My appetite in this wintry season is all-consuming. And double alas, I sprained my ankle a few weeks before Christmas and didn’t realise that I’d done such a thing until I went running  and wondered why my ankle swelled up like a dodgy doughnut. And despite all my careful exercises and taking it easy and not over-using it and blah de boring blah, I’m still unable to even do my basic 10,000 steps without it blowing up again and letting me know that tomorrow belongs to it.

Consequently, I’m a larger version of myself than I’d like to be. Which is so very much a first world problem that you may well wonder why I’m banging on about it BUT, without physical activity, my mental health takes something of a nosedive. I rely on running to keep me reasonably level. Without it, I’m flailing around trying to find straws to clutch to keep me afloat. And if you throw a lack of action on the employment front into the mix, you have a recipe for disaster.

Hence baking bread. And making new things for supper just about every night. Last night I made gnudi (little ricotta dumplings with a sage and tomato and basil sauce thing) from a recipe in the weekend papers. I’m looking at you, Señor Ottolenghi. To my dismay, they began to disintegrate in the simmering water just like a poached egg does round its margins. I fished them out, but they were a dozen damp little disasters rather than twelve perky little pillows. I did my usual post-mortem on them as I hoovered them down; ricotta too wet, celeriac too tasteless, basil and sage fighting it out for alpha flavour ( the basil, being an Italian thug, won) but oh, how disappointed was I? Tonight, it’s back to the safe haven of the Student Vegetarian Cookbook’s pumpkin goulash.

Ochhhhhh. In a week’s time, I’ll pluck up courage and try Señor Slater’s version of gnudi, and see how they are.

This weekend it’ll be the annual marmalade-fest when the house fills up with the smell of simmering Sevilles and I fill the cupboard with jars of what I hope will be crystal clear jars of orange sunshine. Laying down supplies for the year ahead. A good way to spend time when I’m on hold.

Waiting and waiting and waiting for the go-ahead for a book means also waiting to earn money. Eating very, very economically. Trying not to breathe too deeply less something else falls off and requires some form of therapy to put it back together again. Gnudi are cheap. So is home-made marmalade and my heavens, pumpkin goulash is amazingly inexpensive. Especially if it’s made with half a pumpkin found lurking at the back of the fridge. So nothing gets wasted. Not even four eggs, one month past their sell-by date. Ew.